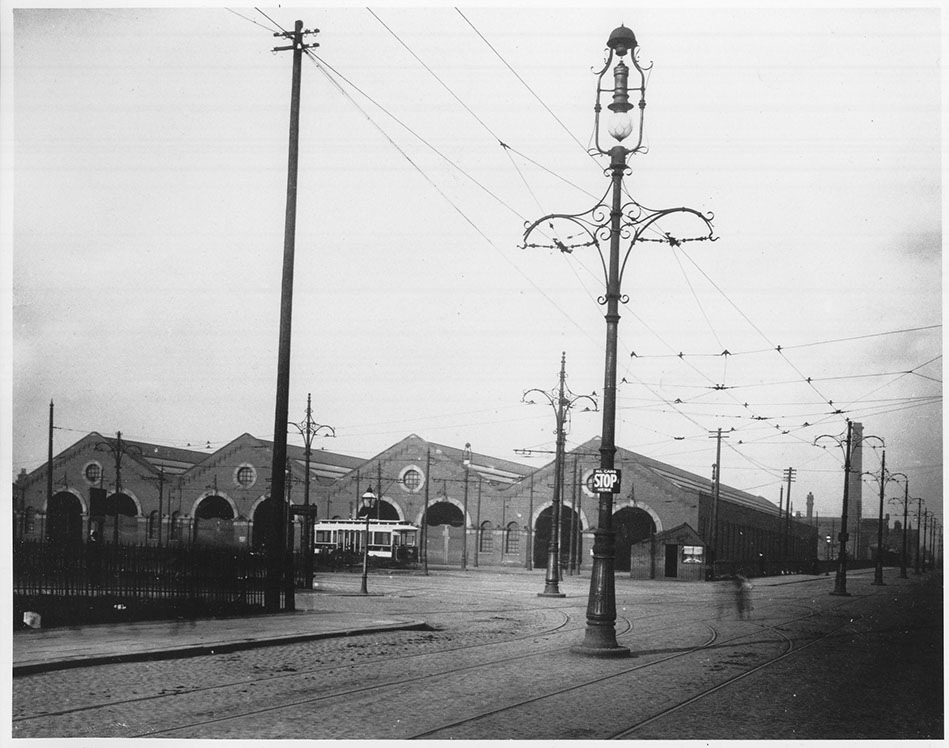 Salford Corporation’s Frederick Road Tram Depot, before the construction of the entrance arch

1915 Conductresses (female conductors) are employed by Manchester Corporation for the first time due to the shortage of staff because of the First World War.

1918 2,917 Manchester Corporation employees join H.M. Forces in the First World War (of which over 300 lost their lives).

1918 Backlog of maintenance and wartime neglect of the tramways has to be remedied.

1919 LUT’s third and successful attempt at motor bus operation, between Lowton and Newton-le-Willows. 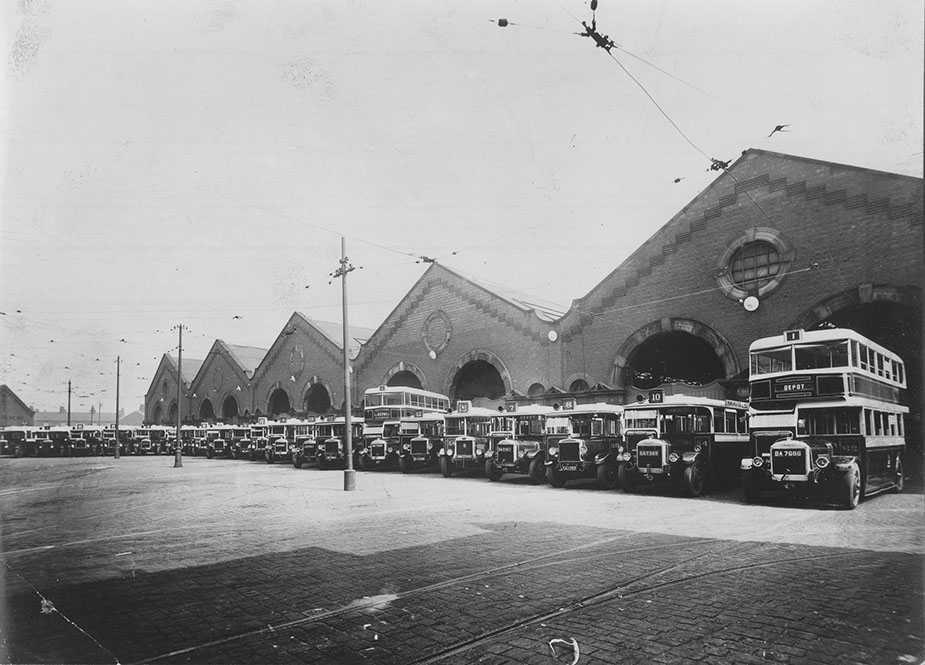 1921 SHMD takes over its section of the Oldham, Ashton and Hyde Tramway Company’s operations allowing through services between Manchester and Hyde.

1923 Railway Grouping into the ‘Big Four’ – local services are now provided by the newly formed London, Midland and Scottish Railway. 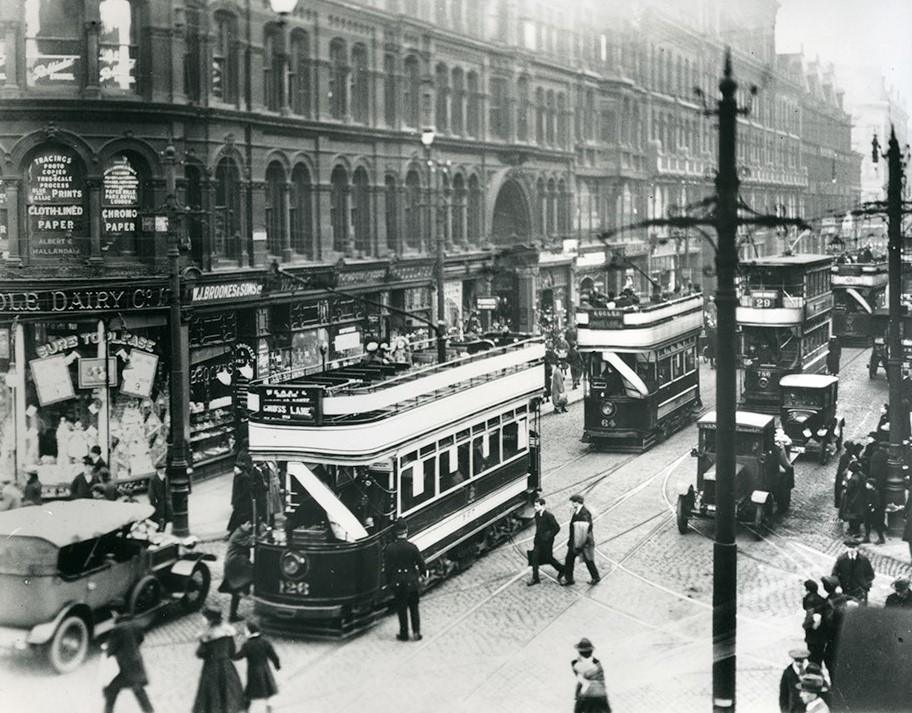 1925 First trolleybus service operates between Ashton-under-Lyne and Oldham by Oldham and Ashton corporations, soon withdrawn and replaced by trams on the Hathershaw to Oldham section (August).

1926 Public transport is paralysed by the General Strike.

1927 First pooling arrangements of buses between Bury, Ramsbottom and Rawtenstall corporations to allow a coordinated service between the three operators.

1928 Manchester Corporation converts its buses from solid to pneumatic tyres.

1928 Top covers are fitted to the upper decks of Manchester Corporation’s buses.

1928 On Manchester Corporation’s all-night services, buses substitute for tramcars on some routes.

1928 Manchester Corporation opens the first part of the new Queens Road bus garage (now part of the Museum of Transport).

1928 Decision made by Oldham Corporation to abandon its tramways.

1928 Henry Mattinson (General Manager of Manchester Corporation Tramways Department) and Ernest Tilly are granted a patent for a ticket machine produced by Brecknell Munro and Rogers Ltd (September). The machine is trialled, but it is not successful.

1928 Salford Corporation’s transport offices are destroyed by fire and administration is moved to its Frederick Road Depot.

1929 Manchester Corporation tramway system itself reaches its maximum of 123 miles of route (292 track miles), employing 953 trams, making it the third largest system in the country. Only London and Birmingham are bigger. Decision made not to develop tramways further. 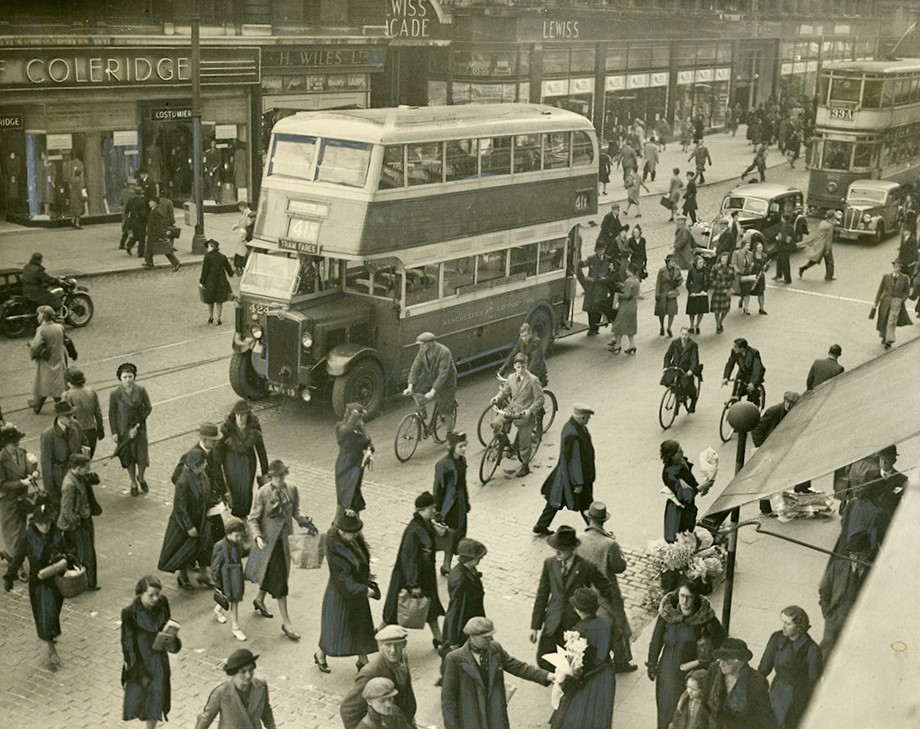 A typical busy day in Manchester in the 1930s: both bus and tram head up Market Street towards Piccadilly

1930 Manchester Corporation’s 53 tram service is converted to operation by double-deck buses (6 April). This is the first main tramway track to be abandoned.

1930 Manchester Corporation decides to adopt diesel engines rather than petrol engines for buses.

1930 Leigh Corporation’s Holden Road garage opens and due to its height, low height 13’6” high buses have to be used (13 November).

1930 JR Tognarelli (operator of express services from Bolton to Manchester) taken over by Bolton, Manchester, Oldham and Salford corporations and LUT (December).

1931 Options considered regarding the formation of a joint transport board for Greater Manchester. Report published August 1933, but nothing comes of the proposals.

1931 Bury and Rochdale corporations adopt the diesel engine for buses.

1933 London Passenger Transport Board takes over all bus, trolleybus, tram and underground railway operations – and is watched closely by local operators.

1934 Trafford Park Estates hands over its tramway operations to Manchester, Salford and Stretford corporations along with the power to operate other forms of transport in Trafford Park. 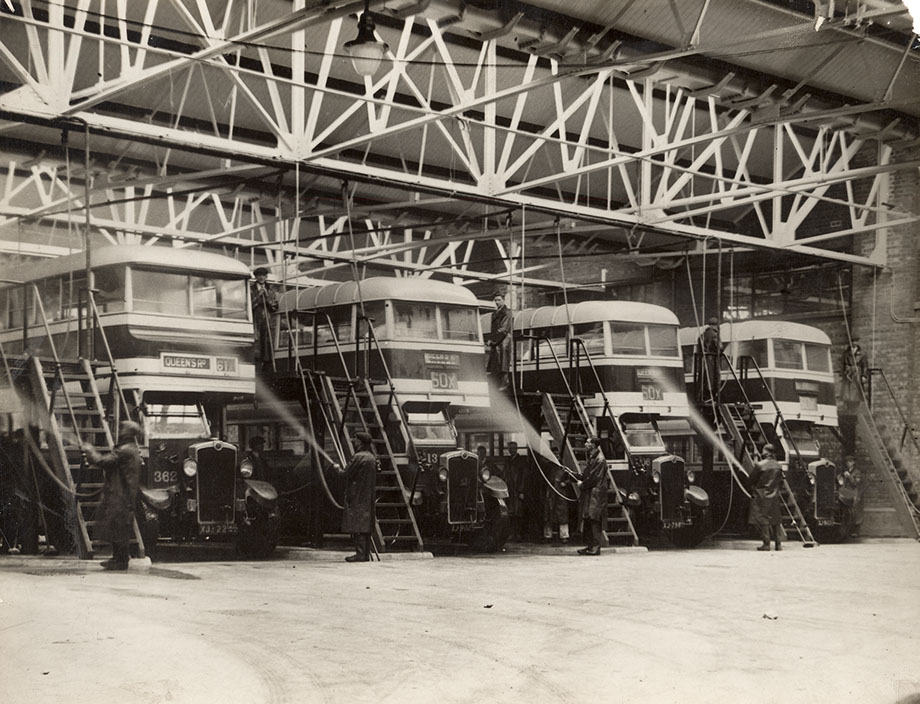 Buses being washed in Manchester Corporation's Queens Road Bus Garage (now the Lower Hall of the Museum of Transport, 1930s

1935 38 miles of tramway have now been abandoned by Manchester Corporation.

1935 SHMD applies for powers to operate trolleybuses but Ashton-under-Lyne and Manchester corporations run the services.

1936 Four new trolleybuses, operated by SLT but owned by Bolton Corporation, go into service to replace the remaining Bolton Corporation trams on the Bolton to Leigh service between Bolton and Four Lane Ends (29 March).

1939 All tramway abandonment plans in Greater Manchester put on hold.

1939 Only one Oldham Corporation tram route remained: Waterhead to Manchester (a joint service between Oldham and Manchester corporations).

1939 During the Second World War, Bury reintroduces trams to part of the Whitefield service. 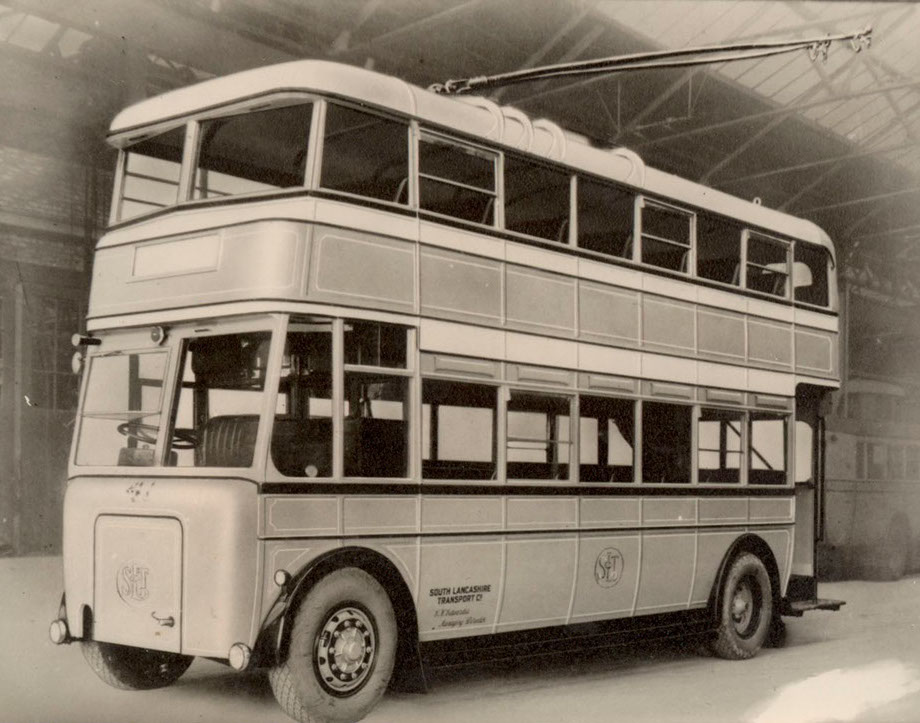 1940 Manchester Blitz results in public transport services being unable to enter the city centre due to severe bomb damage (December).

1941 Manchester’s Parrs Wood garage taken over by Ministry of Aircraft Production for use as a munitions factory.

1941 90 motor buses loaned by Manchester Corporation to London Passenger Transport Board and 182 to other undertakings for the war period. Bolton Corporation loans 24 and North Western also loan buses to London.

1941 Manchester Corporation’s trolleybus network is extended to serve Moston and the A.V. Roe munitions factory instead of being used on the Hyde route. 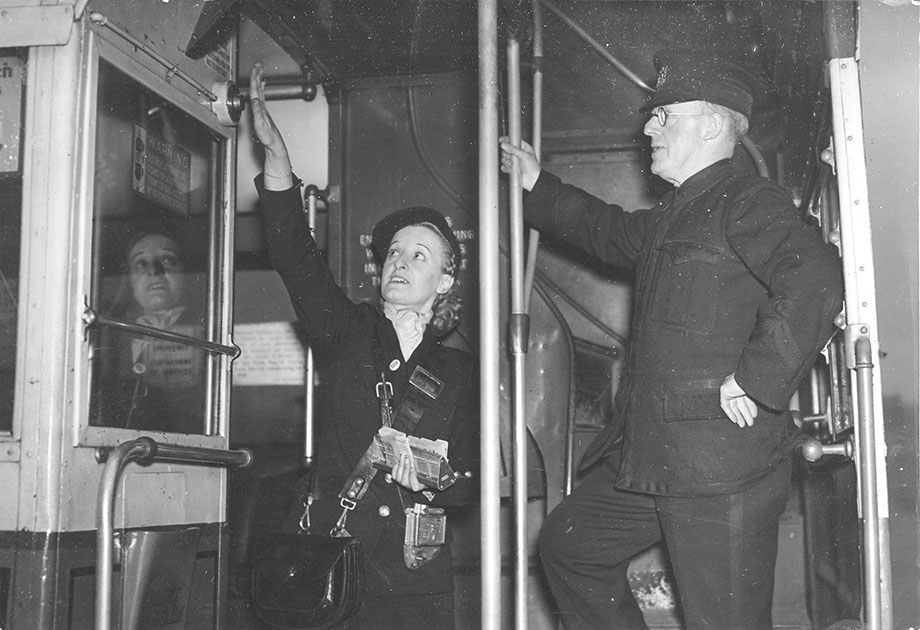 Conductress undergoing training in preparation for working on her own

1942 A portion of Manchester Corporation’s Northenden bus garage is taken over by the Ministry of Aircraft Production.

1942 Sites are used for the open-air parking of buses as a wartime measure to prevent the risk of damage to buses as a result of bombing of garages.

1942 Tilling and BAT arrangement is discontinued. North Western passes to BAT control in exchange for Tilling taking on Crosville.

1944 The Yelloway Motor Services Rochdale to Manchester route is taken over by Manchester, Oldham and Rochdale corporations.

1944 Last tram to run over SLT tracks, operated by Bolton Corporation on the Walkden service (13 November).

1945 By the end of the War, 167 women cleaners and mechanics have been employed by Manchester Corporation.

1945 1,591 conductresses are given notice of dismissal by Manchester Corporation in order for male employees returning from war service to resume duties.

1945 Replacement of the remaining tramways recommences. 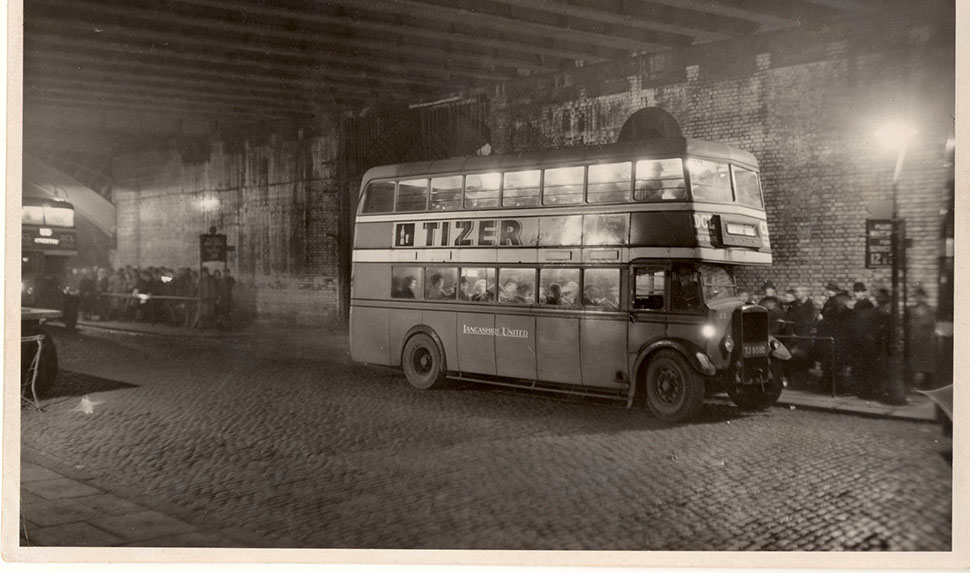