1969 Stockport Corporation receives the last front engined, rear entrance bus for use in the UK.

1969 The last traditional half cab bus for the UK market is delivered to SELNEC, having been ordered by Ramsbottom UDC. 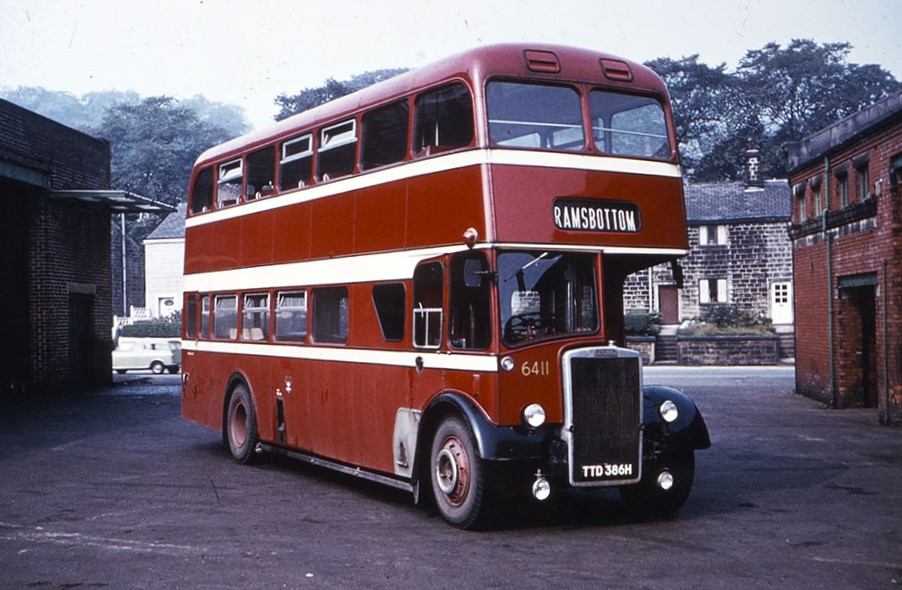 SELNEC takes delivery of the last traditional half cab bus in the UK, ordered by Ramsbottom UDC 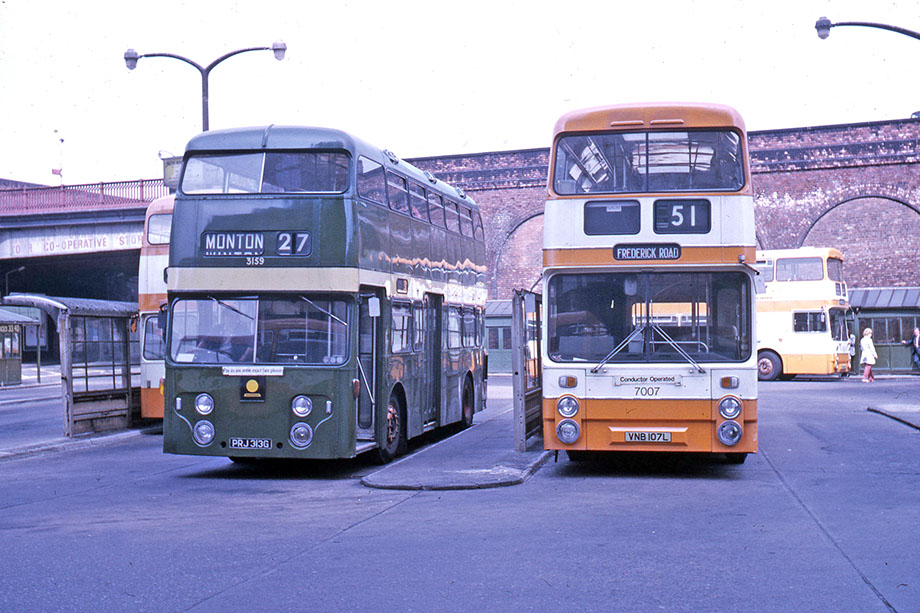 All change: in with the new orange and white livery, out with the old! Changing scenes at Victoria Bus Station in Salford

1970 SELNEC introduces a new livery for its buses of orange and white.

1970 The first computers are used for the creation of schedules and duty rosters for drivers and conductors.

1970 Plans are prepared for a new underground railway between Victoria and Piccadilly stations running under central Manchester, allowing passengers to travel by rail from one side of the city to the other for the first time (Picc-Vic).

1970 A working agreement with SELNEC regarding joint services is reached with LUT.

1971 SELNEC is restructured with its divisions becoming companies (1 March).

1971 One Man Operation now accounts for 47% of service mileage.

1971 Half-fare travel concessions are introduced for the elderly, restricted to off-peak hours only.

1972 Concessionary passes for the elderly can now be used at all times, seven days a week (1 Jan).

1972 Local Government Act which will create metropolitan counties and districts in 1974.

1972 Radio links are established with inspectors to help control buses.

1972 The first 200 SELNEC standard buses are delivered after development work between engineers, manufacturers and body builders result in a standard SELNEC specification for its buses.

1972 SELNEC becomes first PTE to sign an agreement with British Rail allowing it to determine the frequencies, fares and standards of local passenger rail services within the area (11 December).

1973 Lancashire United Transport (LUT) introduces 'Videmat' self service ticket machines which produce tickets printed with an image of the coins inserted into the machine to pay each fare (23 July).

1973 Concessionary travel is extended to rail travel for elderly persons and school children.

1973 Introduction of the "hush bus", which has a noise level significantly lower than other buses, is introduced.

1973 The cost of diesel fuel increases significantly due to the oil crisis.

1974 A flat concessionary fare for the elderly and children in Greater Manchester is introduced (1st April). 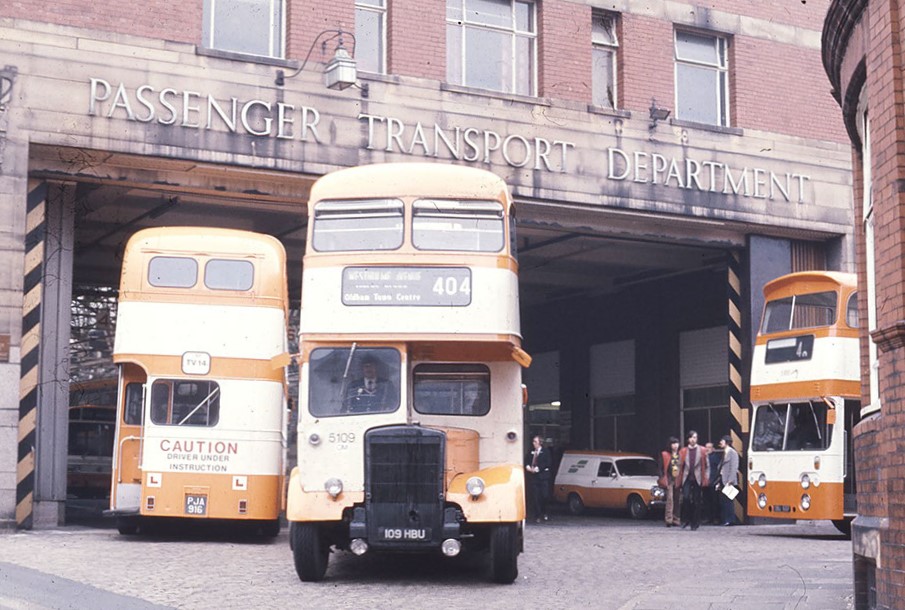 A busy scene outside Oldham Garage: in four years much of the fleet had ended up in the new colours

1975 Greater Manchester Transport’s second electric bus (Lucas Electric Bus) is delivered with a top speed of 45mph. It can run for a 12 hour duty, can cover 40 miles between charges and its batteries weigh 2 tons. It can carry a full load of 34 passengers and accelerate from 0 to 30 in 15 seconds. (January).

1975 Over a third all buses in the fleet have been equipped with radios, including all buses used on night services.

1975 The Lucas Electric Bus travels non-stop from Manchester to Birmingham at 27mph – at the time the longest distance ever travelled by an electric bus in one go.

1975 Silent Rider operates on rush hour services. With a top speed of 40mph, it has 41 seats, can run for 40 miles between charges and can be fully recharged in 3 hours.

1976 SaverSeven is extended to include all rail travel in Greater Manchester.

1977 Work starts on preparing the original Queens Road bus garage in Manchester as the Museum of Transport.

1979 Official opening of the Museum of Transport (4 May).

1979 Greater Manchester Transport's new Training Department at Bennett Street opens (23 May) and a new livery of yellow and white is introduced for its training buses (June). 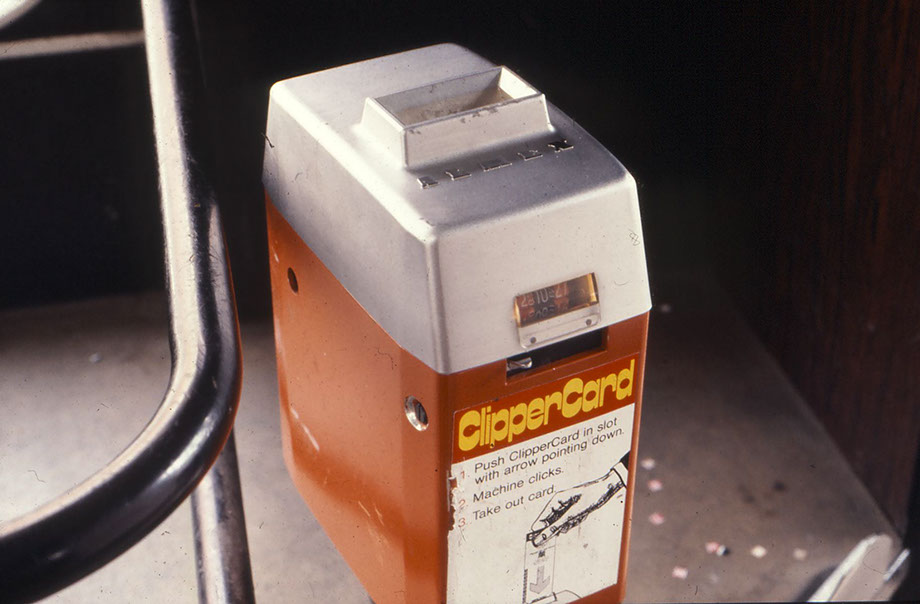 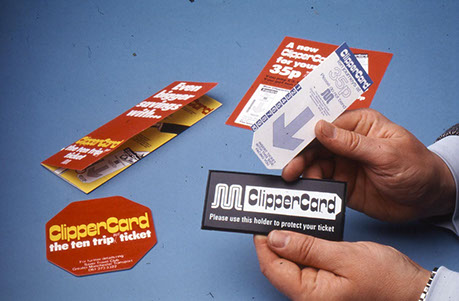 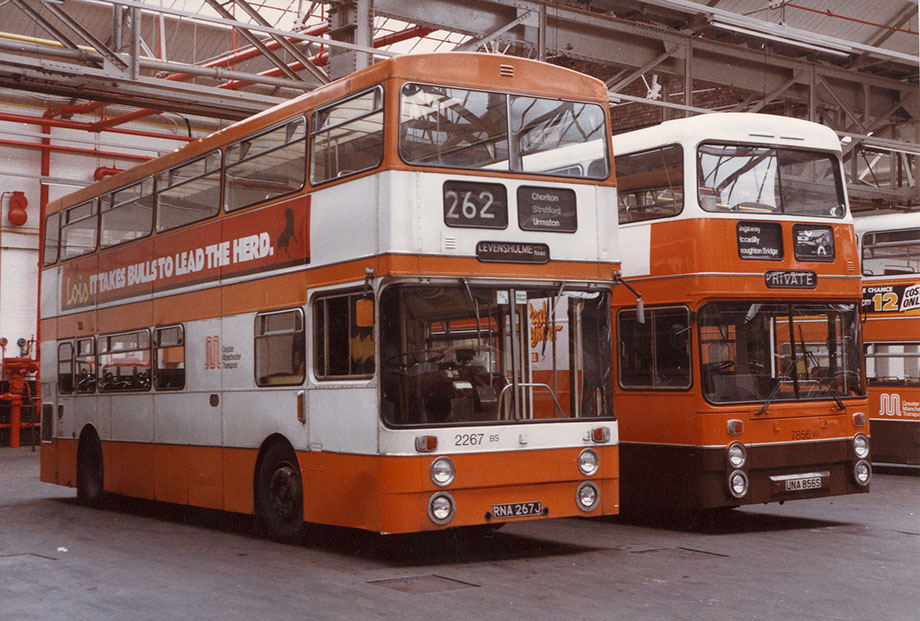 Livery change time again: 2267 in the original orange and white livery and 7856 in the new livery

1980 Phases 1 and 2 of the new Stockport bus station are opened.

1981 A new livery is introduced for the bus fleet: white, orange and brown (summer).

1981 The Concessionary ClipperCard is introduced.

1981 Lancashire United Transport is absorbed into Greater Manchester Transport and the LUT name disappears from buses.

1982 The Saver Monthly is introduced.

1982 Sunday Rover day ticket introduced to encourage use of buses on Sundays.

1982 Working hours for drivers, conductors and catering staff are reduced from 40 to 39 on a 'without loss of pay' basis.

1983 The first and second stages of the reconstructed Ashton-under-Lyne Bus Station are opened (February).

1983 The working week for inspectors and traffic staff is reduced from 39 to 38 hours.

1983 Bus services are provided free of charge on 25th and 26th December.

1984 The reconstruction of Radcliffe bus station is completed (April).

1984 The age at which children can travel free on buses is raised from 3 to 5 years.

1984 The first Bill seeking permission to build Metrolink is submitted to Parliament. 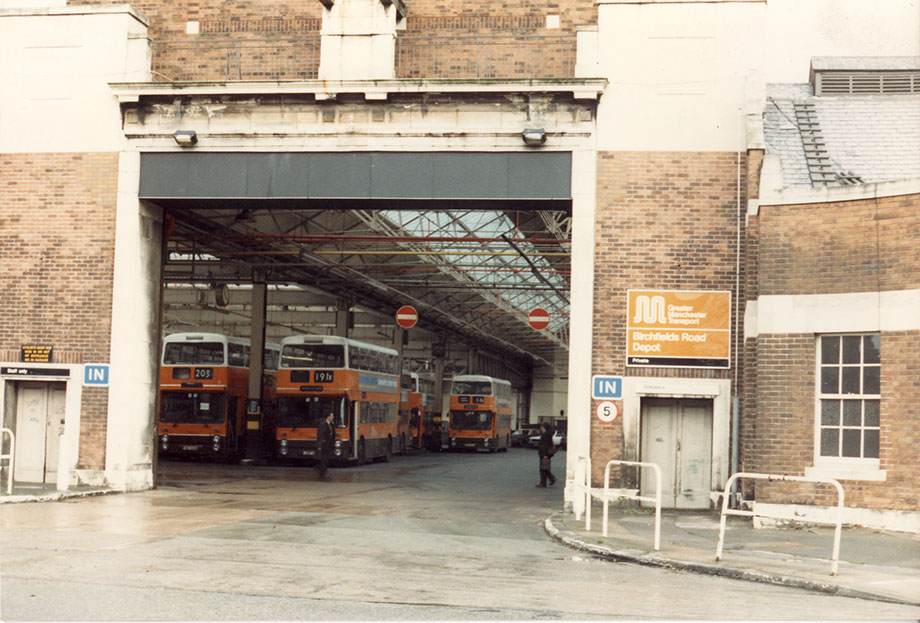 1985 The first Ring and Ride bus service for the mobility impaired is established in Manchester (September).

1985 To promote the use of ClipperCards and Saver tickets, television advertising is used for the first time: 'They cut the fares, they cut the fuss'.

1985 A shadow joint board Passenger Transport Authority is established for Greater Manchester. 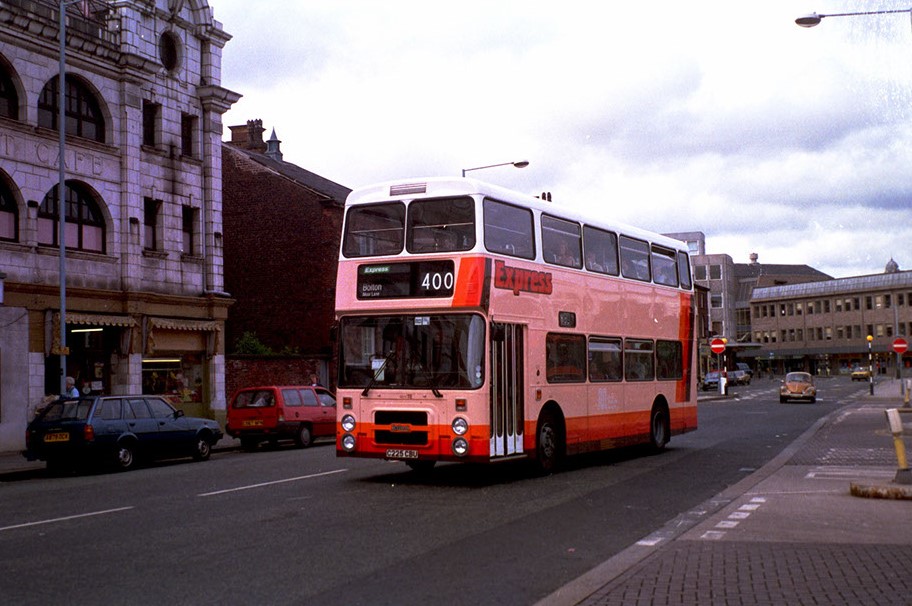